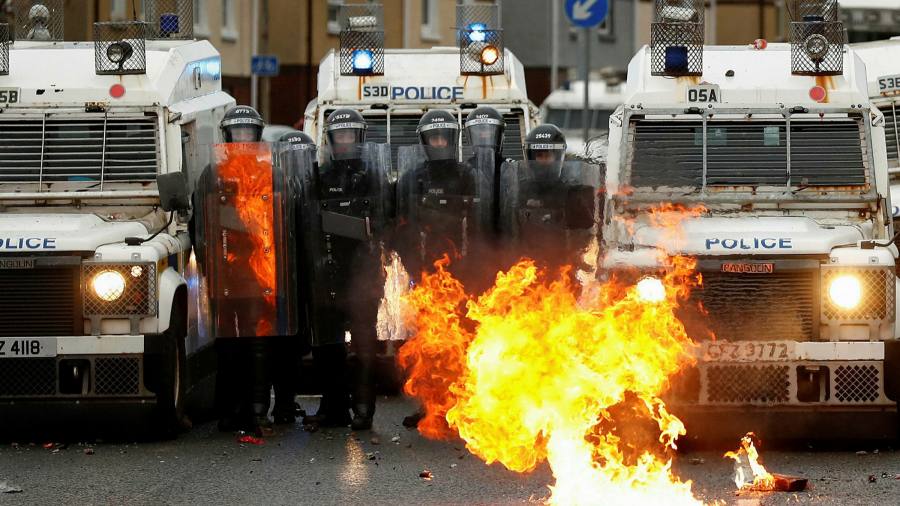 In the weeks before the 2016 Brexit referendum, John Major and Tony Blair, the two UK prime ministers most closely associated with bringing peace to Northern Ireland, travelled together to Belfast. They carried a warning. A vote to leave the EU would destabilise the Good Friday peace agreement between unionists and nationalists.

Violent disorder on the streets of Northern Ireland has made their concerns look depressingly prescient. The loyalist gangs leading the riots harbour several grievances, including allegedly “soft” treatment by the police of breaches of coronavirus lockdown rules by nationalist politicians. At their core, though, the protests reflect unionist anger about the region’s post-Brexit status.

The 1998 peace agreement paid homage to Northern Ireland’s two competing identities. An open border with the Irish Republic acknowledged the aspirations of nationalists for a united Ireland. Embedding the principle of “consent” assured unionists the region would remain part of the UK unless and until a majority decided otherwise. Unionists feel, with some cause, that the Brexit deal’s Northern Ireland protocol has upset this balance.

Boris Johnson’s insistence on the hardest of Brexits created a new economic “border” between Northern Ireland and Great Britain — necessary to keep open the land border while safeguarding the integrity of the EU single market. Since January, the reality of Brexit has exposed the hollowness of the prime minister’s claims that customs and regulatory checks would be invisible. The reality is that the prime minister took Britain out of the single market and customs union while leaving Northern Ireland within the economic orbit of the EU.

Unionist politicians strongly object to how the protocol treats their region differently from the rest of the UK. Johnson’s unilateral decision to postpone implementation of key parts of the protocol has prompted court action by Brussels. Unsurprisingly, EU governments fear that the prime minister wants to renege on the Brexit withdrawal agreement. The EU Commission, however, did not help its case when, albeit briefly, it used the protocol as a weapon in a separate dispute about Covid-19 vaccines.

A border in the Irish Sea is unavoidable, but the prime minister’s political manoeuvring has lost him the trust of Northern Ireland’s main unionist party, the Democratic Unionists, as well as that of Brussels. Many unionists fear that Johnson is indifferent about the damage done to the UK union. Restoring confidence will take time.

What is clear is that the responsibility to fill the political vacuum now being occupied by violent protests rests squarely with the prime minister. As a starting point, he should seek to regain the trust of the EU and the Irish government by offering an unequivocal commitment to stand by the Northern Ireland protocol.

The UK and EU now appear to be edging towards an agreement on implementation of the protocol. The best eventual outcome is probably a light-touch border regime that minimises as far as possible the disruption caused by the checks. This could be accompanied by firm assurances for unionists from both UK and Irish governments that the principle of consent remains intact.

Such an arrangement may not satisfy the extreme loyalists behind the present disorder, but the objective must be to cement faith among moderates in the Good Friday Agreement. Johnson led the campaign for Brexit. He denied that it risked destabilising the region. Now he must shoulder his responsibility to safeguard peace.