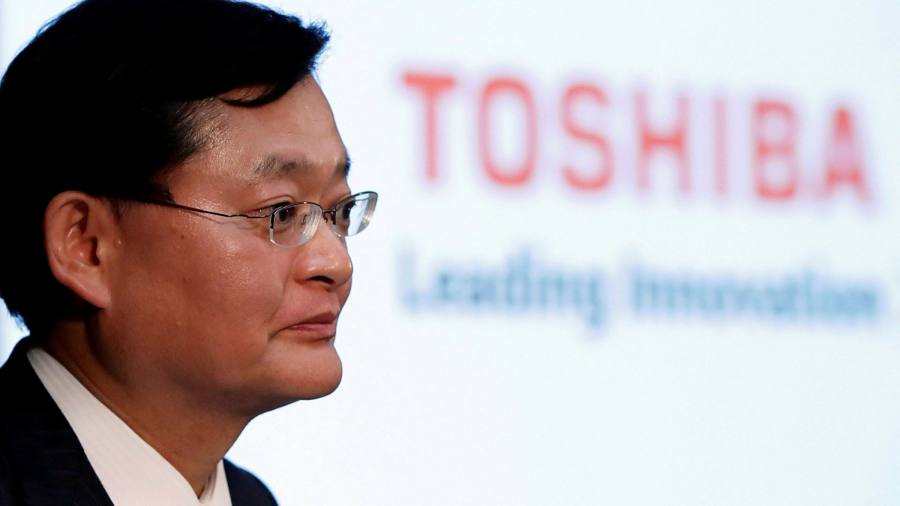 The chief executive of Toshiba has decided to step down as the company’s “old guard” launch a boardroom coup to block a $20bn buyout offer by European private equity group CVC, according to two people with knowledge of the matter.

The resignation of Nobuaki Kurumatani is likely to be announced formally on Wednesday as board members prepare to meet to discuss proposals that would put the conglomerate at the centre of Japan’s biggest ever leveraged buyout deal.

The upheaval comes as rival private equity firm KKR is planning to outbid CVC with a buyout offer in excess of $20bn for Toshiba, according to several people briefed on the plans, increasing prospects for a bidding war between the two US groups.

Even before CVC submitted its proposal last week, there were signs of growing internal division at Toshiba, with some factions unhappy with the way Kurumatani has dealt with its activist shareholders and the changes he has implemented since taking over in 2018.

In the company’s annual shareholder meeting last year, Kurumatani secured only a 57 per cent support rate for his re-election, and earlier this year his efforts to defeat a shareholder-led proposal failed at an investor vote.

At least two of Toshiba’s biggest shareholders have called upon the board to consider seriously any bids from private equity-led consortiums, which would be likely to include a significant Japanese presence to satisfy regulatory sensitivity over a company deeply involved in the nuclear and defence industries.

A Toshiba board meeting on Wednesday had been expected to debate a proposal from one of its members that Kurumatani step down immediately as head of a company that he has led since it emerged from financial crisis in 2018. Kurumatani agreed to resign before being forced to do so, said one person close to the board. Toshiba declined to comment.

People close to the company, whose largest investors include some of the region’s biggest activist funds, said Toshiba’s senior management had been thrown into “civil war” by the emergence of a preliminary buyout approach last week from CVC.

Some executives within Toshiba had opposed the offer, citing concerns about potential conflict of interest. Kurumatani served as head of CVC’s Japan operations before being appointed Toshiba’s CEO and Yoshiaki Fujimori, a senior executive adviser to CVC in Japan, is also a member of the Japanese group’s board.

But the stakes are about to be raised, with other groups including Brookfield and KKR poised to submit formal proposals of their own, and as CVC prepares to supply more detail on how it would structure a bid on this scale. The departure of an executive associated with CVC is unlikely to make those bids disappear.

Clashes within Toshiba come as people close to CVC said the Luxembourg-based buyout fund was willing to give majority control of Toshiba to domestic investors to make its $20bn bid acceptable to the Japanese government.

“There is no strong preference for majority control,” said one person close to CVC. “The proposal can be adjusted to its best shape in consultation with the government.”

While most private equity firms prefer to take majority control of companies they are buying, the CVC deal could be structured in a similar way to when a consortium led by US private equity group Bain Capital acquired Toshiba’s chip unit Kioxia in 2018. In that case, Bain held a 49.9 per cent voting stake in Kioxia, while Toshiba and optical products maker Hoya together held the remaining 50.1 per cent.

CVC has told Toshiba that it plans to form a consortium, but it has not made clear who its co-investors will be. People close to the fund said it was open to working with investment funds backed by the Japanese government, such as Japan Investment Corporation, to receive regulatory clearance.

CVC, KKR and Brookfield, which acquired Westinghouse from Toshiba in 2018 after the US nuclear business filed for bankruptcy protection, declined to comment.