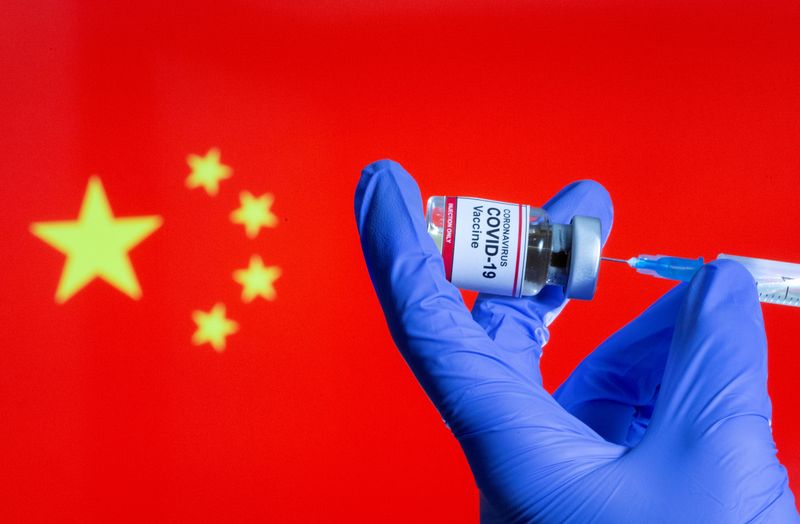 © Reuters. FILE PHOTO: A woman holds a small bottle labeled with a “Coronavirus COVID-19 Vaccine” sticker and a medical syringe in front of displayed China flag in this illustration

SANTIAGO (Reuters) – Chilean authorities on Sunday backed the country’s widespread use of the COVID-19 vaccine manufactured by Chinese firm Sinovac after China’s top disease official appeared to make conflicting statements about its efficacy.

Gao Fu, the director of the Chinese Centers for Disease Control and Prevention, told a conference in the Chinese city of Chengdu on Saturday that the country was considering mixing COVID-19 vaccines since currently available vaccines “don’t have very high rates of protection.”

He later said in an interview with state media that his comments were “completely misunderstood.”

Available data shows Chinese vaccines lag behind others including Pfizer (NYSE:) and Moderna (NASDAQ:) in terms of efficacy, but require less stringent temperature controls during storage.

Chile paid $3.5 million to host a clinical trial of the vaccine and has also ordered 60 million doses to be administered to its 18 million-strong population over three years.

The country has largely relied on the Sinovac vaccine, along with smaller numbers of Pfizer’s equivalent drug, to roll out one of the world’s fastest vaccination campaigns, so far inoculating 4.6 million people with two doses and 7.2 million with one.

Chile also signed deals for the supply of vaccines from western drugmakers Johnson & Johnson (NYSE:) and AstraZeneca (NASDAQ:) but these are yet to materialise because of supply bottlenecks.

On Sunday, Chilean science minister Andres Couve said it was important to focus on the data and the vaccine’s effectiveness in reducing illness that required medical treatment or being hospitalized or dying, which it achieved in the Brazilian study in 83.7% and 100% of cases respectively.

He said Chile’s health ministry will shortly publish a real world study on the effectiveness of both vaccines rolled out in its population and appealed to Chileans to continue to participate in the vaccination programme.

“The University of Chile study and the study the health ministry will release say the same thing: the number of people who fall ill and are hospitalized has decreased,” he told local newspaper La Tercera. “We are going down the right path.”