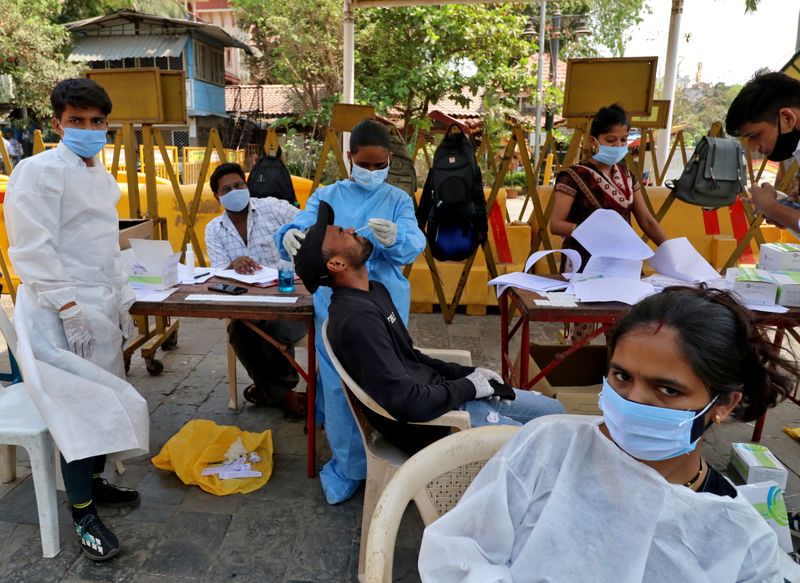 © Reuters. FILE PHOTO: A healthcare worker collects a swab sample from a man during a rapid antigen testing campaign for the coronavirus disease (COVID-19), in Mumbai

NEW DELHI (Reuters) -Many Indian state leaders have asked Prime Minister Narendra Modi to open up vaccinations to most of the country’s hundreds of millions of adults, following a second surge in infections that has eclipsed the first wave.

India breached the grim milestone of 100,000 daily infections for the first time on Monday, and cases jumped by 96,982 on Tuesday, data from the health ministry showed. There were 446 new deaths, taking the total to 165,547.

The country of 1.35 billion people has administered 80.9 million vaccine doses, the most after the United States and China, but it lags far behind in immunisations per capita.

India, the world’s biggest vaccine maker, this month expanded its inoculation programme to include everyone above the age of 45. But so far it has vaccinated only about 1 in 25 people, compared with nearly 1 in 2 in Britain and 1 in 3 in the United States, according to the Our World in Data https://ourworldindata.org/covid-vaccinations website.

“If a larger number of young and working population is vaccinated, the intensity of the cases would be much lower than the treatment that they need today,” Uddhav Thackeray, chief minister of India’s worst affected Maharashtra state, wrote in a letter to Modi on Monday.

Delhi Chief Minister Arvind Kejriwal and many other states have also asked for faster and wider vaccinations, with some like Odisha repeatedly flagging tightness in supplies even for the prioritised groups.

The federal government has said it will widen the vaccination campaign to include other age groups in the “near future”, and that vaccine supplies are being stepped up.

India has exported more than 64 million vaccine doses but has now slowed shipments to prioritise its domestic needs.

With 12.7 million cases, India is the worst affected country after the United States and Brazil.

The country’s daily infections have risen many fold since hitting a multi-month low in early February, when authorities eased most restrictions and people largely stopped wearing masks and social distancing.

India has recorded the most number of infections in the past week anywhere in the world. More infectious variants of the virus may have played a role in the second surge, some epidemiologists say.

There is also widespread criticism over tens of thousands of mostly maskless people crowding political rallies across four states holding elections. Modi and his close cabinet colleagues have addressed the rallies.

There are also concerns over tens of thousands of Hindu devotees gathering on the banks of the river Ganges, in the northern state of Uttarakhand ruled by Modi’s party, for the weeks long ‘Kumbh Mela’, or pitcher festival.

Organisers had initially expected more than 150 million people to arrive, though the numbers are likely to be much lower now due the rise in cases.