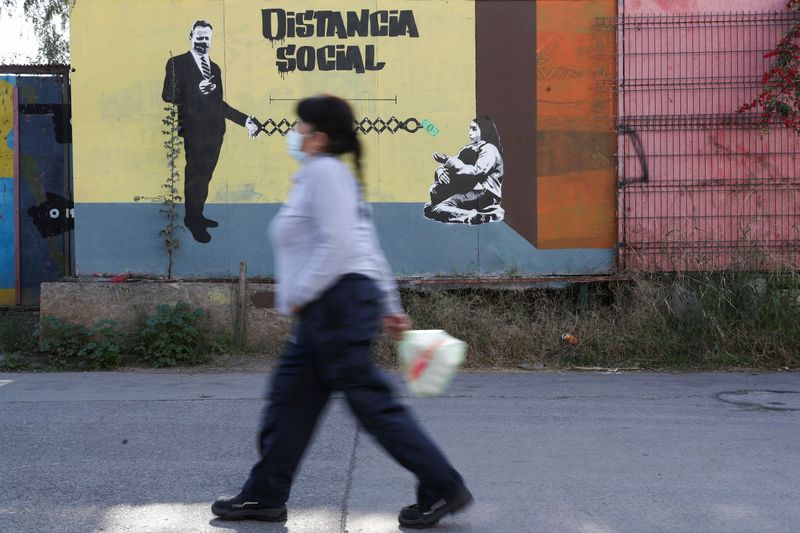 © Reuters. FILE PHOTO: A woman walks past a graffiti reading ‘Social distance’ during the outbreak of the coronavirus disease (COVID-19) in Santiago, Chile June 7, 2021. REUTERS/Ivan Alvarado

By Aislinn Laing and Gabriela Donoso

SANTIAGO (Reuters) – Chilean health authorities announced a blanket lockdown across the capital Santiago on Thursday following some of the worst COVID-19 case numbers since the pandemic began, despite having fully vaccinated more than half its population.

The development, which will alarm authorities elsewhere who are debating how fast to reopen as vaccination campaigns gather steam, comes as Chile’s confirmed daily caseload surged 17% in the past two weeks nationwide and 25% in the Metropolitan region that includes Santiago and is home to half the country’s population.

Intensive care beds in the capital region are now at 98% capacity. Jose Luis Espinoza, the president of Chile’s National Federation of Nursing Associations (FENASENF), said his members were “on the verge of collapse.”

Chile has one of the world’s highest vaccination rates. Around 75% of its 15 million residents have already received at least one dose of vaccine, and nearly 58% are completely inoculated. On a per capita basis among larger countries, it the vaccination leader in the Americas and the fifth highest worldwide, according to Reuters data.

It has used nearly 23 million vaccines doses so far – 17.2 million of Sinovac’s, 4.6 million of Pfizer/BioNTech’s, and less than 1 million each of AstraZeneca’s (L:) and CanSino’s.

Vaccines are not 100% effective, medical experts pointed out, and there is a time lag before they reach their highest efficacy. Also driving the fierce second wave is lockdown fatigue and the appearance of more contagious variants.

Of 7,716 people confirmed as infected with COVID-19 between Wednesday and Thursday, 73% had not been fully inoculated and 74% were under 49 years old, the health ministry said.

Dr. Cesar Cortes, emergency physician at the University of Chile hospital, said people who stayed home last year were now more afraid of being without work.

“Last year, there was low circulation and the confinement measures were more effective because people were scared of dying,” he said. “That’s not happening now.”

Without its vaccines, Chile would be far worse off, he said.

“The complicated situation we are seeing now would be catastrophic,” he said.

Chile’s health regulator, the ISP, said genome sequencing of infections between December and June had confirmed the Brazilian P1 variant was the most prevalent in the country, and “twice as contagious as the original strain.”

Chile is now embarking on vaccinating teenagers, having offered jabs to older age groups. Two weeks ago it introduced green cards to confer greater freedom on the vaccinated in an attempt to encourage the wary to come forward.

An infectious disease specialist at a large Santiago hospital, who asked not to be named because he was not authorized to speak officially, said vaccines could not completely relieve the overburdened hospitals.

“Around 10% of people, even if they are vaccinated, will not be protected against serious illness. That’s hundreds of thousands of people going to ICUs,” he said. “And when our health system is strained to the limit as it is now, that percentage alone is enough to overwhelm them.”

Biden pointedly asks Putin about cyberattacks at summit By Reuters

Podcast: How Small Businesses Survived COVID and Are Poised for Recovery | ABA Banking...

Banking Shirley Duppstadt - June 16, 2021 0
The post-COVID economy is snapping back in a big way — but are small businesses prepared to capitalize on the recovery? In the first...

Podcast: How Small Businesses Survived COVID and Are Poised for Recovery...