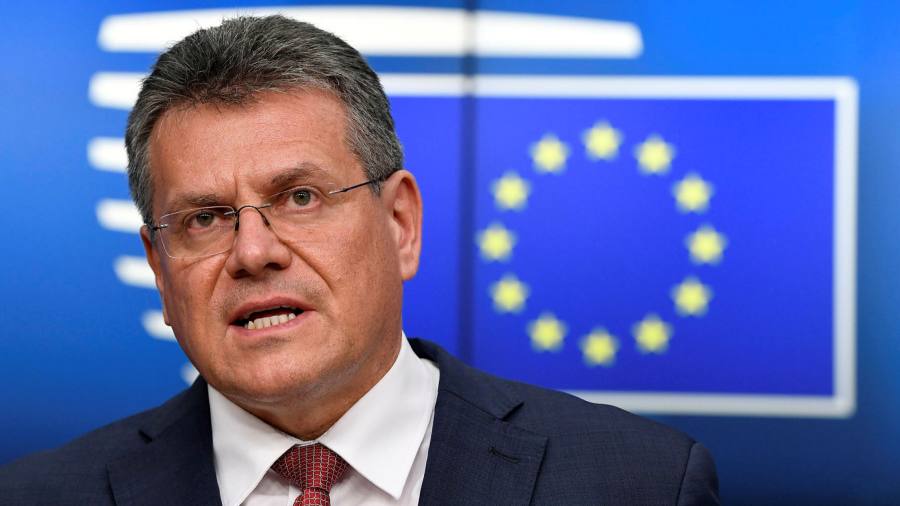 Brussels’ Brexit chief has warned that the EU will launch legal action against the UK “very soon” in response to British plans to unilaterally grant Northern Irish businesses longer waivers from trading rules agreed by the two sides.

Maros Sefcovic, the EU commissioner in charge of overseeing the trade deal agreed with Britain last year, said the decisions announced by the UK government on Wednesday had been a “very negative surprise” — one that undermined detailed work by EU and UK officials over recent weeks to find solutions to problems faced by companies trading across the Irish Sea.

These include the imminent expiry on April 1 of a waiver that has allowed supermarkets and suppliers to avoid some bureaucratic requirements normally placed on trade in food.

In an interview with the FT, Sefcovic said the European Commission was already working on “infringement proceedings” against the UK, for what it sees as a breach of the two sides’ 2019 divorce treaty, which includes the Northern Ireland protocol to prevent a hard trade border on the island of Ireland.

“We are currently preparing it and it would be really something coming to our table very soon,” he said. “The most precise term I can give you is really very soon.”

The UK’s divorce treaty with the EU foresees possibilities for dispute-settlement arbitration in the event of a disagreement, which could ultimately result in penalties including fines and tariffs.

Sefcovic did not confirm the exact legal route the commission might now be taking and would not be drawn when asked if the European Court of Justice could be an option.

In October last year, the commission launched infringement proceedings against the UK after Boris Johnson’s government pressed ahead with internal market legislation that would have allowed Britain to override elements of the 2019 Brexit divorce deal. The legal action did not go ahead after Johnson removed the offending clauses in December — a few weeks before the UK and EU signed a landmark trade deal.

Relations between the UK and EU were thrown into a fresh crisis in January after Brussels triggered an override mechanism in the protocol in response to concerns over vaccine supplies — a move it quickly backed away from following an outcry from London and Dublin.

The latest row comes after the UK’s announcement that it would extend temporary rule exemptions intended to help companies adjust to new trading arrangements.

Simon Coveney, Ireland’s foreign minister, said on Thursday that the EU was “negotiating with a partner it simply can’t trust”, after the UK government’s move, while MEPs said the step threatened ratification of a trade and future-relationship deal struck at the end of last year.

The measures announced by the UK include an extension to the grace period — until the end of October — before health certificates are required for agrifood shipments from Great Britain to Northern Ireland.

London also wants to extend grace periods covering parcels and items such as bulbs and plants.

Downing Street insisted on Thursday that it remained “committed” to the Northern Ireland protocol and wanted to work with the EU to settle problems at the border.

In Brussels the finger of blame for the tough British approach was being pointed at Lord David Frost, Johnson’s former Brexit negotiator and now a cabinet member responsible for EU affairs, having replaced Michael Gove on March 1.

Downing Street insisted that it was Gove — not Frost — who had indicated Britain would have to act to safeguard supermarket supplies, arguing retailers needed four weeks’ notice to change supply plans before the new checks came into force.

Sefcovic told MEPs on Thursday that, while the commission had been informed at technical level on Tuesday that the UK was preparing to unveil plans, it was not aware of the substance of the measures until they were publicly announced. His Wednesday night call with Frost was his first meeting with him since the British minister took on his new role.

Frost has argued that the government’s actions were needed to give companies certainty and that they were only temporary. 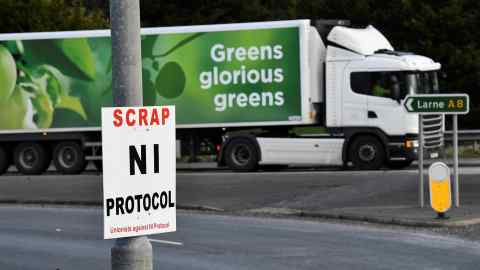 But Sefcovic said the British move “had a very strong” parallels with the crisis in relations that occurred last autumn when Britain announced plans to break international law by overwriting parts of the protocol.

“It’s a bit déjà vu,” said one EU diplomat. “It fundamentally also calls into question the good faith of the UK in all the discussions on Northern Ireland these last months.”

EU officials note that the UK would have probably obtained a lot of what it is seeking through discussions with Brussels, but UK officials counter that the EU was moving too slowly to avoid supermarket shortages that would have further destabilised Northern Ireland’s political situation.

In addition to threats of legal action by the commission, Britain has also been warned by MEPs that ratification of the two sides’ trade deal is at stake.

“The full implementation of the withdrawal agreement and its protocol [on Northern Ireland] is and remains a red line,” Christophe Hansen, one of the parliament’s lead MEPs on Brexit, said on Thursday

Despite the warnings from MEPs, Downing Street said it expects the EU to complete its ratification process by the end of April, an extended deadline requested by the EU earlier this year and agreed to by the UK.